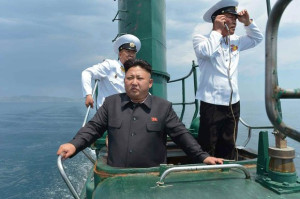 [Read in English]
HE IS treated as a god in North Korea, where his family has ruled for three generations. But Kim Jong-un’s divine status will be seriously damaged this week if the United Nations votes to refer the dictator to the International Criminal Court for crimes against humanity.
A prominent defector has told The Sunday Times that high-ranking Korean officials are “in a panic” over the vote on a draft resolution, fearing that if their leader is labelled a criminal then they, too, will be suspects.
The vote follows a UN report, published earlier this year, accusing the Pyongyang regime of systematic torture, killing and starvation. It named Kim, along with senior officials, as a potential defendant.
“The North Koreans are in a panic because his name was mentioned in the report,” said Ahn Myeong-chol, who was a prison guard before defecting two decades ago.
“The Kim family have inherited power through