Los Angeles, CA. On August 13, students entering Hollywood High School will be given a DVD that shows top evolutionary scientists unable to give any scientific evidence for Darwinian evolution.
In “Evolution vs. God,” a 36-minute movie, producer Ray Comfort interviewed scientists at UCLA and USC, pressing them for observable scientific evidence for evolution. “They couldn’t give a lick of evidence,” Comfort said, “because it doesn’t exist.”

Ron Love, a spokesperson for the producers, added, “Public schools do not allow honest discussion and debate when it comes to the evidence against evolution, on the grounds of separation of church and state and an erroneous stance that creationism and Intelligent Design are unscientific and based on faith. ‘Evolution vs. God’ lifts the mask off this fallacy by showing that it is actually Darwinian evolution that is founded on a lack of observable science and based on blind faith. We want the young people of this nation to consider this, and ask why they're not being given all the evidence—for and against evolution.
“It is obvious that the majority of public educators cannot be trusted to give our children the facts, so it is time to take matters into our own hands for their sake,” Love explained.
Comfort said his goal is to distribute a million “Evolution vs. God” DVDs, especially to students in learning institutions around the world. The best-selling author and TV co-host added, “There are millions who have been duped into blindly believing this unscientific theory, and they need to know the truth.” In 2008 his organization gave away 200,000 copies of Darwin’s famous book, Origin of Species, containing a special Foreword, to 100 U.S. universities in one day.
The full movie, which received more than 100,000 YouTube views in its first three days, can be freely viewed on www.EvolutionVsGod.com.

For interviews with Ray Comfort, contact Jen Thompson at: jthompson@livingwaters.com 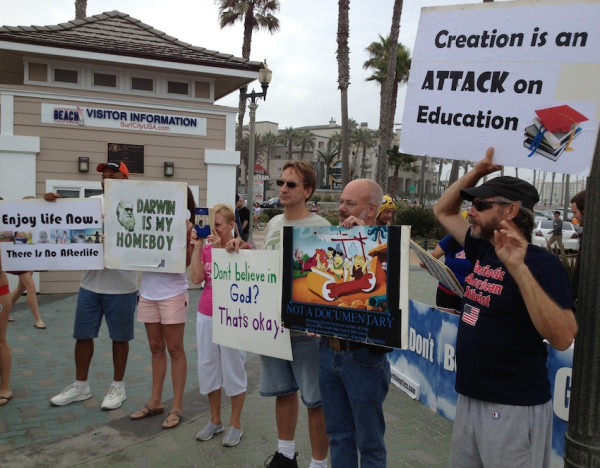